When a cat chooses you as his own, a special bond forms that fills a cat lover’s heart with love and joy. Suddenly, the hardship of the world can fade for a minute as you and your new friend snuggle.

Upon meeting Kiley, Sinatra the cat knew he’d found his special human and the snuggles started at the pair’s first meeting.

Kiley and her mom, Lori, had been looking to adopt a cat for some months, but all the cats they met were skittish of Kiley’s power wheelchair. Until mom and daughter met Sinatra. He had no fear of the motorized chair. 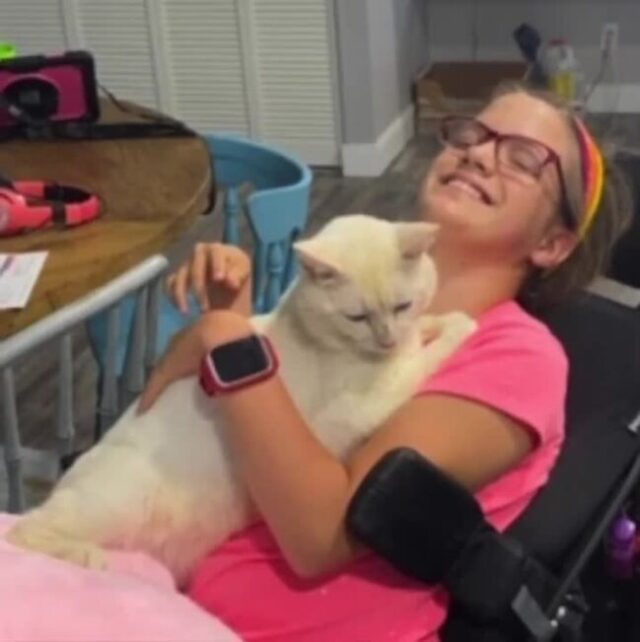 Meeting Sinatra when he came to Suncoast Animal League, Larissa Condarcure knew Kiley and Sinatra were meant for each other. A few months prior, Larissa met Kiley and Lori on their search for the cat meant to be part of their family. Larissa shared, “They explained the troubles that they have had finding a cat, and I was determined to get them the right cat.”

When Kiley came to the shelter to meet Sinatra, the handsome and vocal lad hopped right into her lap, no worries over the chair. Right away, they were best buds, Kiley smiling and Sinatra purring. 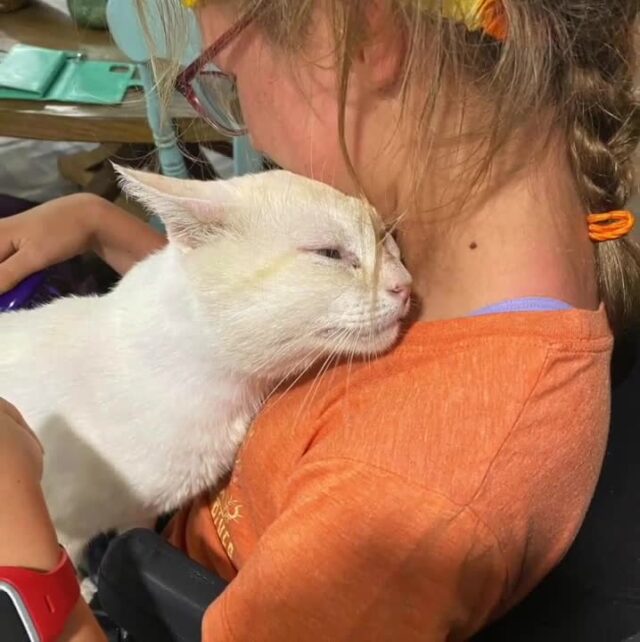 And thanks to Larissa and the kindness of cat guy Chris Poole, Sinatra and Kiley found each other.

Sinatra walked a long and lonely road to find Kiley, but thanks to Chris’s dedication to the stray and community cats in his neighborhood, Sinatra found his forever home. 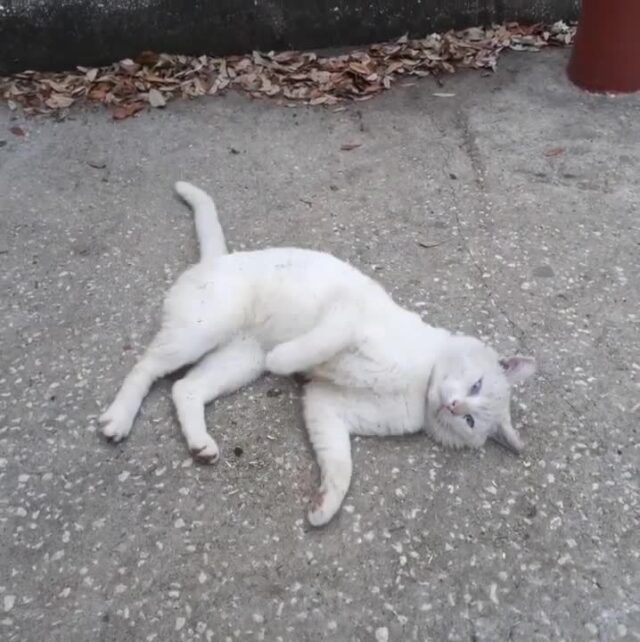 Not long ago, Chris noticed a new face among the hungry cats he feeds. But it wasn’t a surprise to see a new guy in the bunch, as Chris explained to Love Meow, “Apartment complexes usually get lots of stray cats at the dumpsters as well as cats that are left behind when people move out.”

Sinatra would eat the food, but only talked to Chris from afar. In fact, his lovely vocals earned him the name Sinatra. And while he would sing for Chris, it took weeks for him to come close.

It took weeks for Sinatra to allow physical interaction, but when he finally did, Sinatra learned Chris had an amazing treat for a cat. 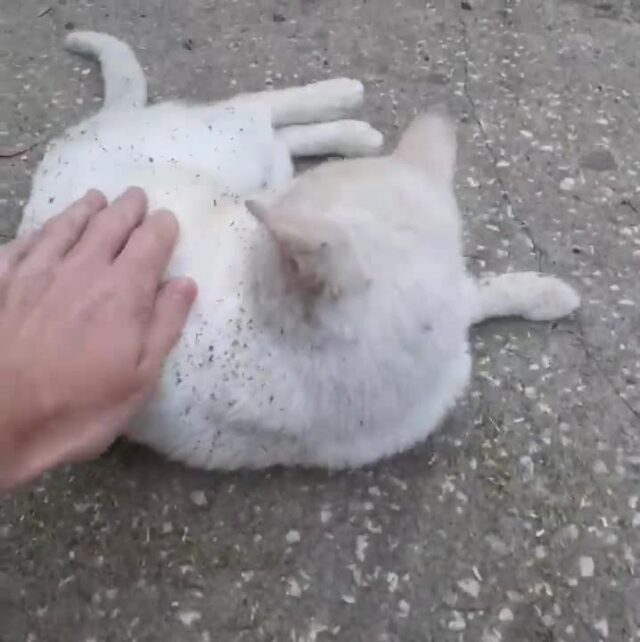 “An even bigger breakthrough came when I introduced him to catnip and silver vine,” Chris said. “He would roll around and let me pet his belly and generally have a good time.”

The catnip and silver vine led Sinatra from the streets to rescue with Suncoast. 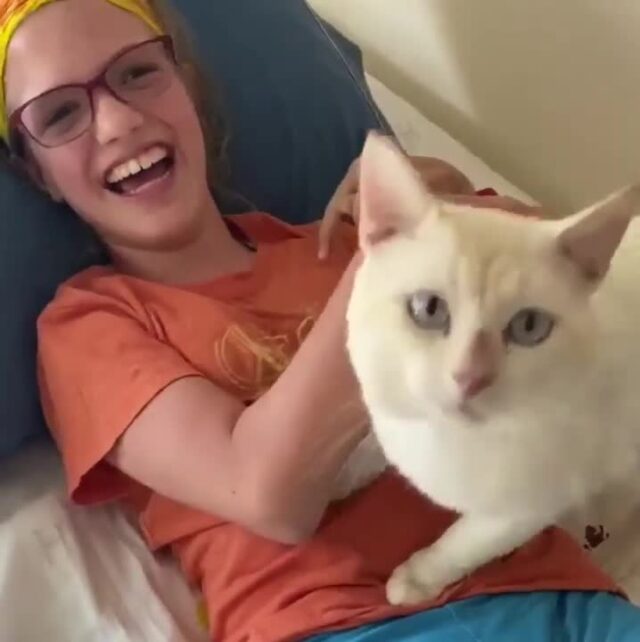 Singing Happily in His Forever Home

As soon as Sinatra came home, he and Kiley snuggled into bed together. From that moment on, he was family. Lori said, “He sits in her lap in the wheelchair as she does her schoolwork and snuggles her throughout the day.” 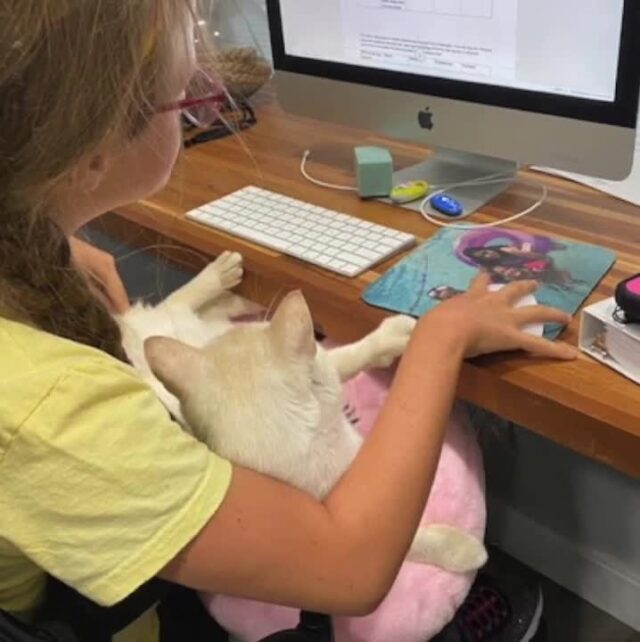 The pair have become inseparable, waking up together each morning and going about the day as a bonded pair. Seeing her daughter so happy and her new furry son purring away, Lori shared, “It is just cuteness overload here!”