UPDATE: Congratulations to Newlyweds Mr. and Mrs. Adam and Anna Lawrence! May their love remain as fat as the cats that brought them together…

Chubby cats led Adam Lawrence and Anna Hosey to find love furever after Anna made a comment on a Facebook post of Adam and a friend’s chunky cat in the Facebook group titled “THIS CAT IS C H O N K Y.” That simple comment began a romance between them that spanned 4,000 miles. Then, as the pandemic hit, Anna moved from Illinois to England where the pair became engaged. And now, the cat lovers are husband and wife!

Adam and Anna eloped to the Iberian Peninsula paradise of Gibraltar to exchange vows on March 25, 2021. The bride shared wedding photos on Facebook, where fans of their story are celebrating their union. Congratulations Mr. and Mrs. Lawrence!

—Update to Story of Love Found Thanks to Chonky Cats—

UPDATE: Their love as fat as the cats they connected over, Anna and Adam are getting married!

Anna Hosey and Adam Lawrence have the best story behind their happily ever after. The couple first connected after Anna commented “both v v cute” on a picture of Adam and a friend’s plump kitty in the Facebook group titled “THIS CAT IS C H O N K Y”.

On Facebook, Anna shared, “I remember after my first phone call with Adam, I told a couple of my best friends ‘I don’t really know this guy, but I think I’m going to marry him.’”

When you know, you know! 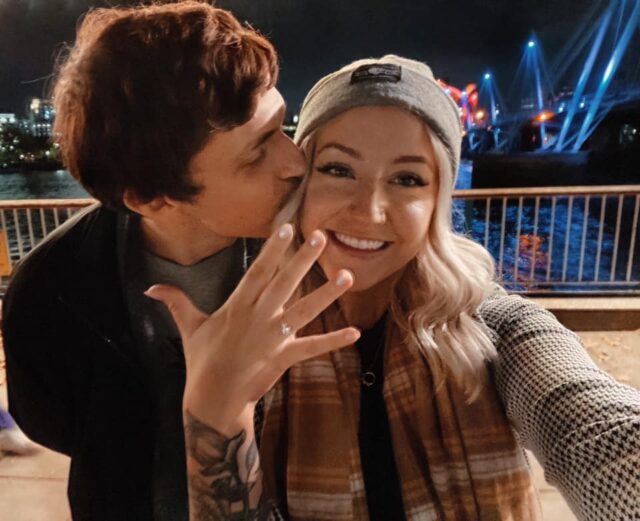 Both Adam and Anna took turns closing the 4,000-mile distance between them until this year’s coronavirus lockdowns settled them into London for a while. When the time came for Anna to return to the U.S., Adam proposed!

Adam said, “I wanted our relationship to carry on so I just decided to propose. My friends and family all love her.” “I was originally planning to do it on London Bridge but I remembered Anna said she didn’t want it to be in a busy place so I waited til the next day. We’d had a nice day out in Camden and I just proposed in my room and she said yes!”

If we didn’t have enough reasons to love cats, now we can add matchmaker to the feline skills as Adam and Anna plan on eloping in January.

—Original Story of Love Found Thanks to Chonky Cats—

Cats can close the widest of distances…

Making connections can be a tough thing, but the modern miracle of the internet helps the wide world shrink to just the right size for perfect chances. Anna Hosey and Adam Lawrence learned this to be true thanks to a Facebook group titled “THIS CAT IS C H O N K Y”.

It all began when Adam posted a couple of photos of him with a friend’s fluffy feline. Adam beamed while the cat was, of course, adorable. Scrolling through posts on the group’s page, Anna came across the cute pair. While Adam wasn’t a hefty cat, Anna liked what she saw, commenting, “Both v v cute”. 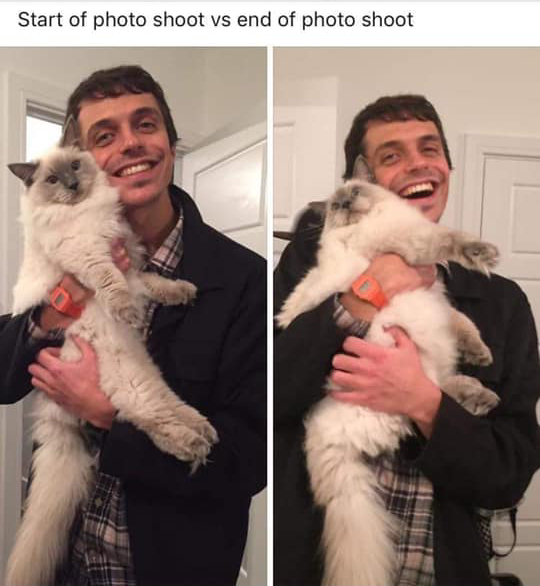 In an interview with MetroUK, Anna said, ‘I had just recently joined the group and immediately noticed Adam, so I made a comment in regards to how cute him and the cat both were.”

Connecting Over the Chonk

Little did she know this was the beginning of something special. All thanks to her love for her tabby kitten Kidden and the chonky cats of Facebook. 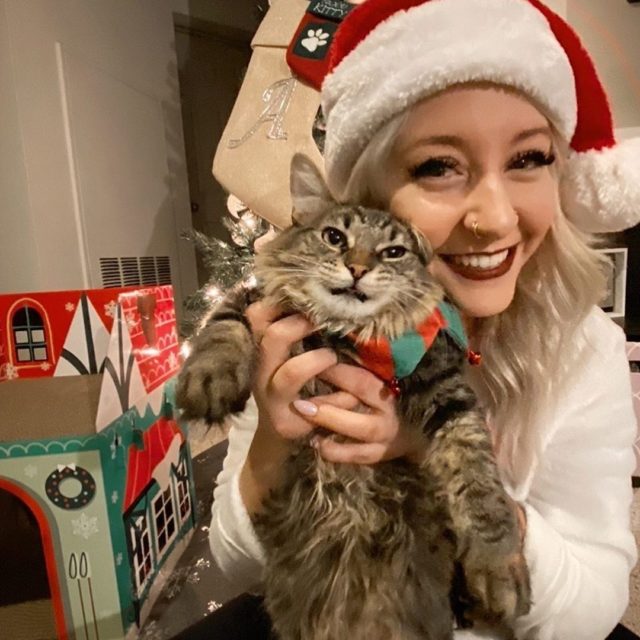 “Adam sent me a private message after I had made the comment and we immediately hit it off based off our massive similarities in music taste and learned we had much more in common after that.”

From then on, Adam spent much time in communication with Anna and Kidden. Between near daily video chats and phone calls, the 4,000-mile distance separating the two shrunk as they connected further. Anna hails from Chicago, Illinois, while Adam resides in London, UK. But, physical distance can’t stop connections that were meant to be.

“We were wildly curious on what would happen if we saw one another in person. We both felt things had become romantic via phone and wanted to know if it would be the same,” said Anna.

Kidden Meets Adam, But Will He Approve?

In December, the pair met in person for the first time. Adam flew from London to Chicago to meet Anna and Kidden. There were surely nerves involved beforehand, but Anna related their meeting was “very natural, like we weren’t strangers at all and there was no awkwardness involved. It was all so… simple.’ 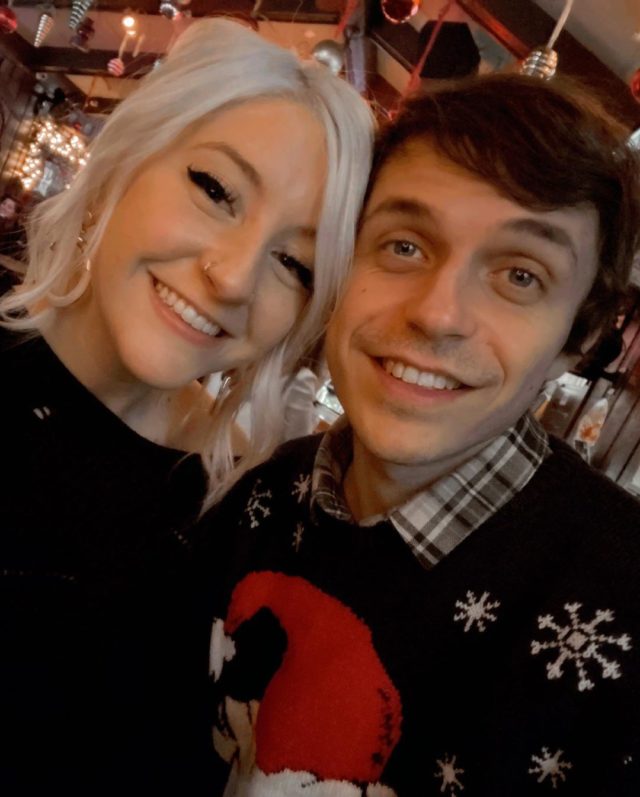 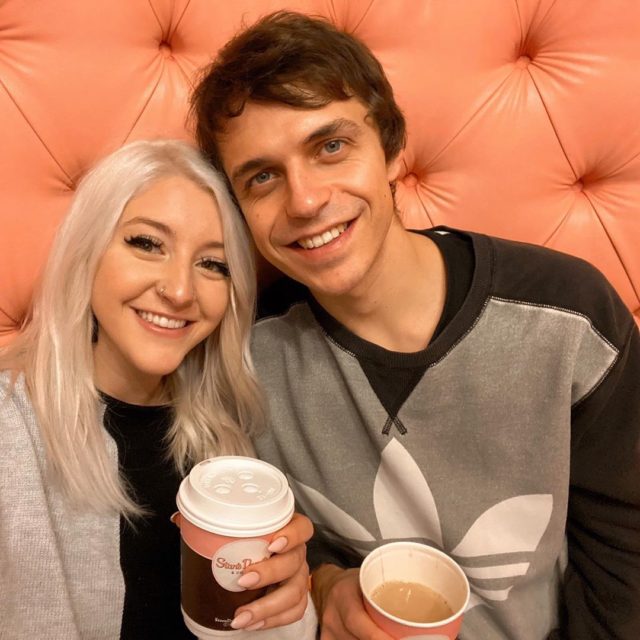 As for Kidden’s feelings regarding Adam, “They took a shine to each other from the get off. Kidden normally doesn’t immediately interact with others, but this time it was not the case. Those two together has been a lovely sight to see!’ With things “somewhere between dating and a relationship”, Anna and Adam are planning on seeing each other again in February. This time, Anna will make the trip the London to visit Adam. Here’s to hoping their love of chonky cats will unite them furever!

Anna posted on Instagram, “Ever met an English boy on a Facebook cat page who’s wild enough to fly from the UK to Chicago?” On Facebook, Adam joked about their unusual meeting, “It sounds a lot more weird than it actually was I promise.”