Part of each sale through the iHeartDogs store is donated to Greater Good, which helps support various charities. Thanks to customers like you, happy endings, like the one below, are made possible.

CATNIP Foundation received a call for assistance with cats abandoned at a flooded home in one of the hardest hit areas of Vidor, Texas following Hurricane Harvey. The scene was a breeder/hoarding situation with a large number of cats and kittens at risk. In the words of a rescuer:

“The cats and kittens found at this location are a real success story of their own! Left behind to fend for themselves, these cats and kittens of all ages survived on chicken bones, pizza and other fast food scraps, left behind as trash on coffee tables, under sofas and even in beds at this hoarder/breeder house. When we arrived, we saw a few grown cats in the backyard, where the grass was so tall, it had overgrown a trampoline and a swing set. On the nearby patio, strewn with foam from shredded dog beds, we spotted a few kittens scamper to hide amongst the debris; others ran through a broken sliding glass door to find ‘safety’ inside.

“We set up a drop trap and started catching cats, but quickly found that the cats were so hungry, that with a little patience, and a lot of stealth and speed, I could scruff the kittens and get them into carriers. We caught cats of all ages and sizes and colors, but at the end of the day, with a van full of cats, we were fairly confident no one was left behind. Just in case, we met with neighbors and provided them with cat food, and they agreed to keep their eye out for any stragglers and let us know if any showed up. Several days later, we were on the road back to Louisiana, with all our rescues safely on their way to new lives.

“All the cats and kittens we rescued received full vetting, vaccinations, testing and were spayed or neutered. Many of the cats we rescued on previous trips had already been adopted or transported to other no-kill shelters where they found loving homes.

A very special transport was arranged for a number of these kittens. Working with Jackson Adoption Center in Jackson Hole Wyoming, and a good friend and fellow cat trapper who has a home there, we were able to get these special kitties on a private jet and on to new homes. It was so wonderful to see the photos as each of these babies went to their new homes. They are truly a ‘rags to riches’ fairytale, and we are so grateful to have been part of it. This could not have happened without the help of GreaterGood.org.”

When you shop at the iHeartCats store, your purchases support Greater Good, making rescues like this possible! 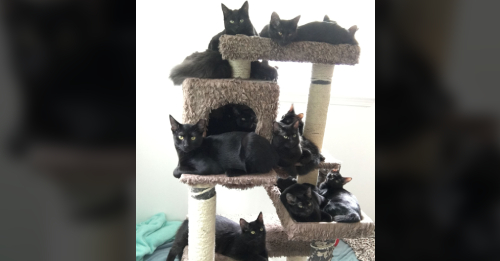