(Note to concerned animal lovers: the wrap that the bride is wearing is faux fur – don’t worry!)

If you’re a cat lover to the core, you may consider it a necessity for  your partner to be a feline fanatic, as well. Perhaps that’s one reason why Michele Bansboll and Nick Anderson found true love in each other.

According to Huffington Post, the newlyweds shared a love of animals from the start. They met in veterinary school, and together, adopted two rescue kitties named Bam-Bam and Wiggles. In addition to dedicating their lives to the wellbeing of animals, they also volunteer at Divine Feline, a rescue near their home in Colorado.

So when this purrfectly matched coupled tied the knot recently, it only made sense that cats would be involved in the celebration – and in their wedding party!

At first, no one knew that the kittens would make an appearance except the bride and groom. But when the adorable duo made their grand entrance, everyone was thrilled. Photographer Autumn Cutaia caught some of the precious moments on camera.

“Everyone in the bridal party was freezing since we had been standing outside without jackets for a while and we told them all to wait for one more surprise and then we brought out the kittens,” bride Michele said in a story by Huffington Post.

The tuxedo kittens, named Jeeves and Houdini, were even “dressed” perfectly for the occasion.

“I think everyone’s voice jumped up an octave when they saw the cuteness overload and no one cared about being cold anymore. One of the groomsmen was even reluctant to go back inside when we were done with group photos because he wanted to hold them!” Michele added in the story.

Along with treating their guests to a sweet surprise, the newlyweds also wanted raise awareness for something that they’re passionate about: rescue.

“We thought of the idea to help promote our volunteer organization by featuring some adorable adoptable kittens in our wedding photos,” the bride told Huffington Post. “Nick and I have always adored cats, which is why we decided to volunteer with the Divine Feline and have them be a part of our special day.”

In addition to their furry guests, the cat-loving couple incorporated a few feline touches throughout their wedding ceremony.

Jeeves and Houdini were available for adoption, but we’re wondering if some of the wedding guests fell in love with these cuties and already gave them forever homes!

Best of luck to the happy couple. We also want to say a special thank you to Autumn Cutaia for letting us share her gorgeous pictures! You can see more of this photographer’s amazing work on her website and Facebook page. 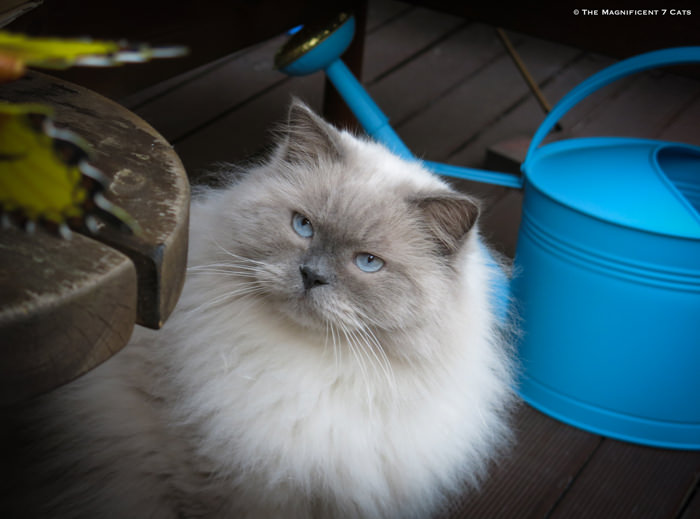