Remember Leo, the cathedral cat who sauntered into a priest’s robes in the middle of a morning prayer?

Well, it seems Leo has some competition for photo-bombing Revd. Robert Willis, Dean of Canterbury.

Another of the Deanery’s resident felines, Tiger, decided he needed some camera time too. In the past few days, he’s managed to steal the milk right out of Dean Robert’s creamer pot twice! And does he care that everyone tuned into the morning prayer can see his silly ways?

Not in the least! 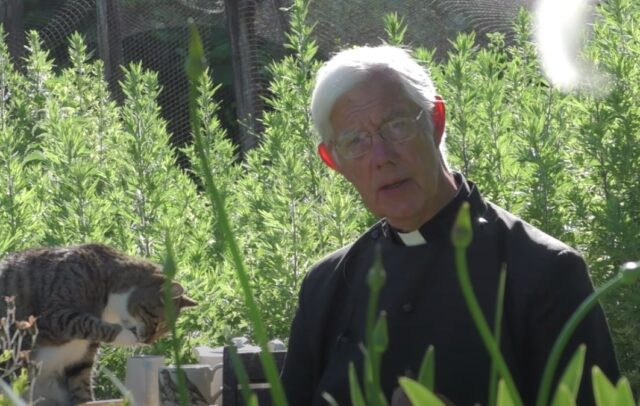 If anything, the grey tabby tiger looks quite proud of himself!

Tiger, Thief of Milk and Attention

In his milk-stealing debut, Tiger’s thieving has already begun as the video opens. Dean Robert welcomes viewers into the Deanery gardens to see the lilies and Tiger, who has joined the Dean for an impromptu breakfast feast. He pays little mind to the Dean’s introduction, going steadily after the milk.

Tiger sticks his paw in and out of the milk pot, licking his paw like he can’t get enough!

But eventually he does and away he goes, off to cat adventures in the garden or tending the livestock… 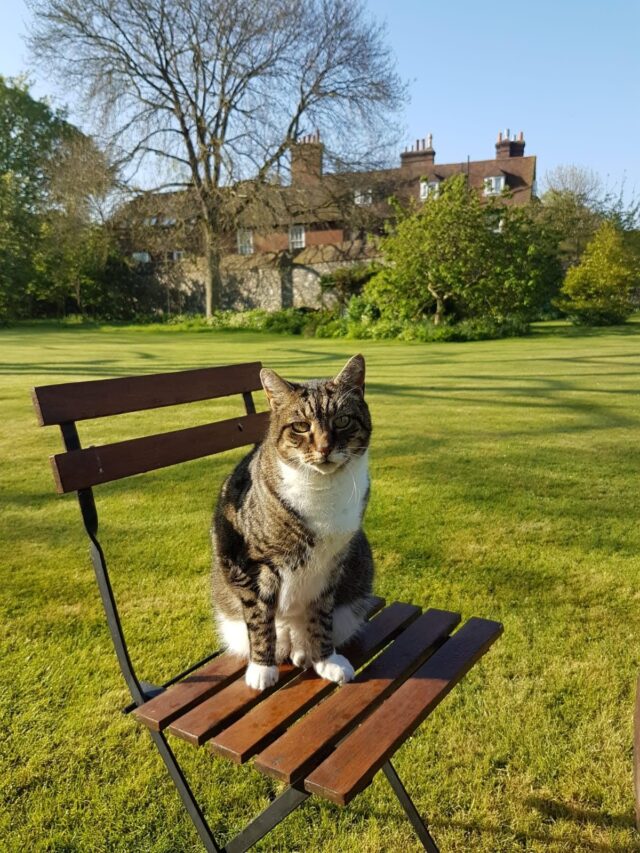 A few days later, we see Tiger joining Dean Robert for morning prayer once again. He saunters into frame and jumps into a chair. There, he sits primly, listening to the Dean. 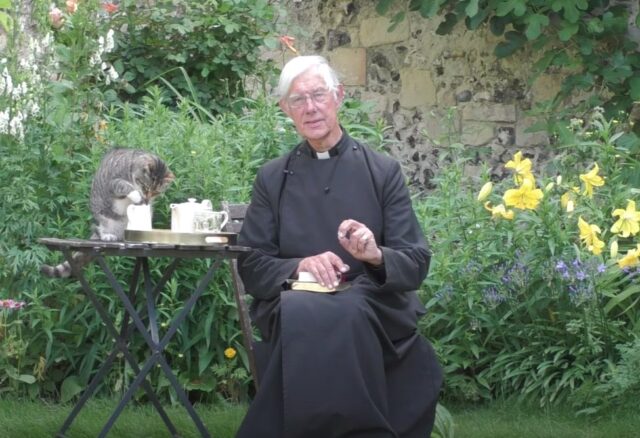 But, there’s more milk on the table. He tries hard to resist, though eventually he gives in to his earthy urges, deciding he got away with his crime before, why not try it again? 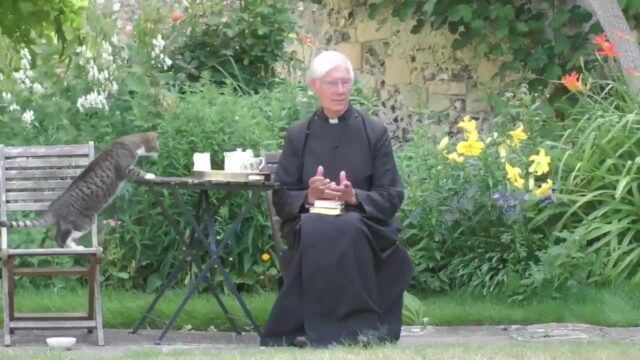 Eventually, the Dean apologizes for the distraction of the friend he’s now acquired, but truly, does anyone mind the kitty intrusion? Nope, and it seems Dean Robert doesn’t mind either!

He gives Tiger a pat and Tiger doesn’t abandon his milk like a busted cat. Oh no, the naughty cat goes right back to his milk.

After five minutes of drinking milk and hearing the wisdom of the wise, he hops off the table like the previous video. But he’s not yet gone. Tiger’s tiger tail remains in view, twitching away. Then, he’s on his merry cat way after a quick brush of love against the Dean’s robes.

A Troublemaker of Adorable Proportions

Tiger used to live inside, but as he enjoys overseeing the work in the gardens, he moved his main quarters to the kitchen garden so he might keep his supervising eye sharp. A spokesperson for the Canterbury Cathedral told iHeartCats.com they like to keep the garden manager happy, so “he has a very comfortable bed in the greenhouse with the tortoises in winter and has made a camp in the potting shed in summer.” 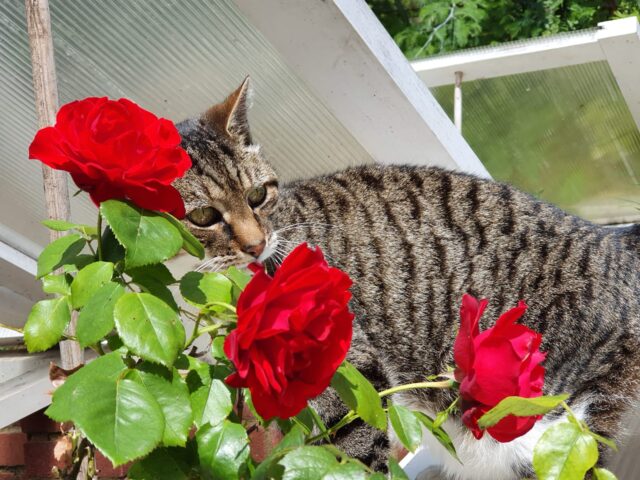 Plus, staying in the gardens allows Tiger, aka ‘Garden Cat’, to sun by the fish pond. There, he watches the fish circle round, the birds flutter by, and the hens roaming. He also enjoys tending the livestock so he’s sometimes called ‘Farmer Cat’. Truly he’s a busy boy and all the work makes him a hungry cat! Though he enjoys being outside, Tiger does keep close to the kitchen. Why? “He has a huge appetite.”

“Whilst the other three, who get fed in the house, are happy to ‘graze’ we have to be careful of Tigey or else he sneaks in to finish every bit of food – or milk! – he can find.” No wonder the Dean’s milk is never safe!

Though he’s a sweetheart who loves tummy rubs, “Sadly, he is also the most unlucky cat in the world and is always getting himself into scrapes – such as the time he went missing for a week and turned up on the cathedral roof and the Dean had to climb up to get him down in the middle of the night with the choristers cheering on from the choir house!” Canterbury wants everyone to know, “In celebration of the Cathedral’s reopening we are offering free entry to children until September 2020 as well as reduced adult prices.”

An even bigger bonus? Visiting the Cathedral offers “perfect opportunities for visitors to try and get a glimpse of Tiger and Leo.” 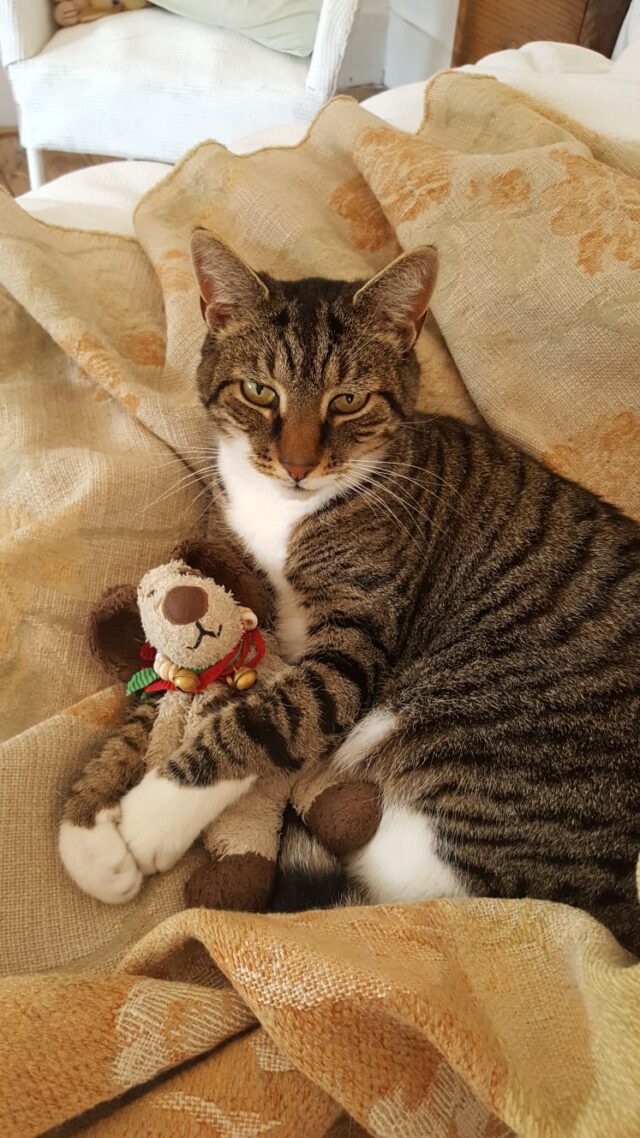