Welcoming a new cat into your home is an exciting occurrence, but introducing cats to each other for the first time can be nerve-wracking.

While felines may act like the ultimate loners, having another cat in the house can do wonders for an only cat. But every cat has their own personality. This means growing the family by another cat can be an unpredictable affair. Some cats will welcome a housemate with open paws or at least a curious sniff before moseying on their way. Others might not be thrilled with the idea of a new kitty brother or sister and throw epic hissy fits.

Cat parents can never be quite sure! But these tips on introducing cats can help everybody get along. And, when our kitties love us and each other, life can be a dream in your own cat paradise. 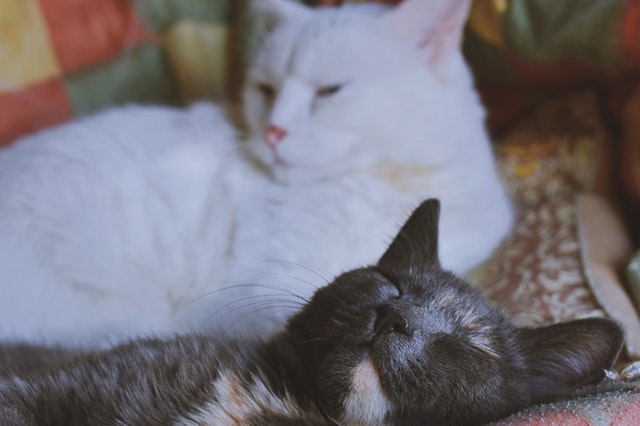 Check out these tips for introducing cats to each other.

When you first bring your new cat home, be sure kitty has a safe room. This should be a quiet place with a door. This way, he can get used to new surroundings without worry. This safe space for the new cat also allows your cat an adjustment period too. Ideally, the new cat and your resident cat will be able to hear and smell each other, but can’t see or touch at this time.

Remember, this was your resident cat’s territory first and a new creature in a cat’s known territory can cause some stress. Keep her needs in mind too when introducing cats to each other. While the cats are still separated, slowly introduce their smells further by offering both cats something with the scent of the other cat on it. Jackson Galaxy, cat daddy guru, recommends using what he refers to as “scent soakers”, or soft items that easily absorb smells, like blankets, stuffed toys, or beds.

In his 5 part series on introducing cats to each other, Galaxy suggests, “You can also gently rub a clean sock or washcloth around the face of the cat to pick up scent that way.”

Once the soft item has had time to soak up the new cat’s scent, “gift” the item to your resident cat. Then, exchange a soft item of your cat’s and give it to the new cat in their safe room.

“This scent-before-sight protocol makes for a much more predictable and harmonious introduction because they can become familiar with each other prior to any visual assessment.” 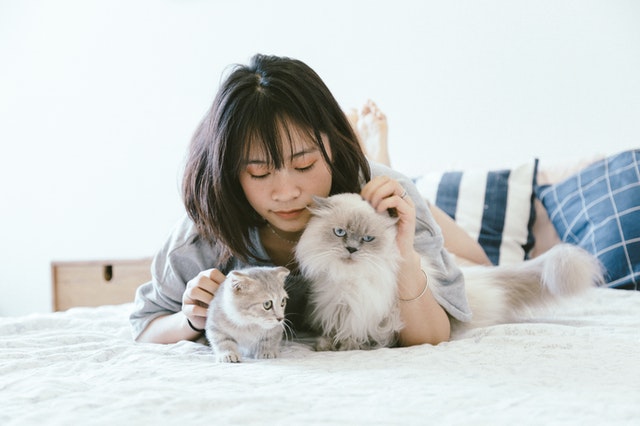 Before the big meeting of cats, try a space swap by placing the new cat out in the house where the other cat roams. While new kitty explores home, put resident cats in the new cat’s safe space for a little awhile. This way you avoid interaction while the new cat is taking a peek around his new space. Your existing cat can also get more of a feel of the new cat by sniffing around the safe room.

“Site swapping allows each cat to explore the other’s territory without ever laying eyes on each other. This is also an opportunity for key signposts—like cat trees, litter boxes, etc.—to take on a shared scent,” explains Galaxy.

Once everybody’s back in their respective spaces, try feeding feed both cats at the same time with the food bowls moved to either side of the door separating the cats. While the cats are dining on either side of the door, they will hear and smell each other. Its kind of like a real blind date! Food is an ultimate motivator for cats. If the kitties can be comfy with each other while eating with the door between them, then you know you’re on your way to success.

If the cats seem to be tolerating these steps to introduction, then the time has come for the felines to meet visually. Galaxy recommends a limited first sight, allowing the cats to meet with a cracked door, pet gate, or screen door between them. This will be the test to reveal how the cats really feel about each other. Don’t be surprised at a hiss or two. Some cats like to make a little noise in a new situation. But, if you end this meeting feeling good about the interaction, you know its almost time to put the furry ones together. 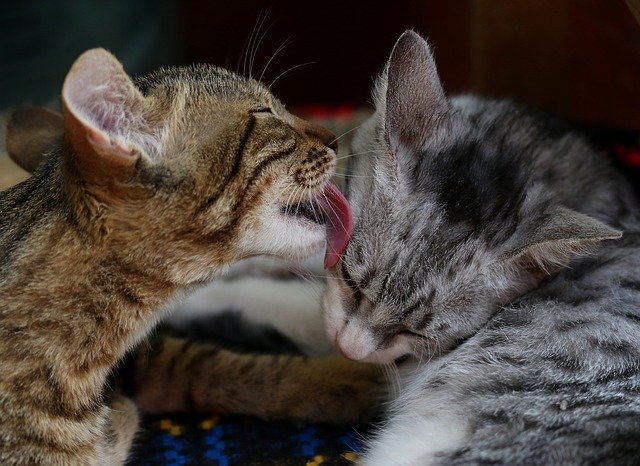 Toys can be a great buffer for the introduction, but to keep the affair civilized, choose a room where you can control “the Unders and the Outs”.  Galaxy recommends play as a great ice breaker, but only if you block off any hiding spaces beneath furniture (Unders) and seal off exits (Outs). This keeps everybody visible in case playtime takes a turn towards a scuffle.

Once the room is sealed and the toys are in, start with both cats at opposite ends of the room. Bring them together slowly by way of their curious natures and love of toy destruction. Treats and encouraging words are a must too!

Be Sure Every Cat Has a Safe Space of Their Own

After the smells have been mingled and the toys have drawn the cats together, be sure everybody still has their own ‘spot’ for after the meeting. The move-in of a new cat is still fresh for both long-term resident and the newcomer, so time alone somewhere safe, meant just for them is a must. While your felines may have fallen in love at first sight, cats still enjoy having their own space to recharge. 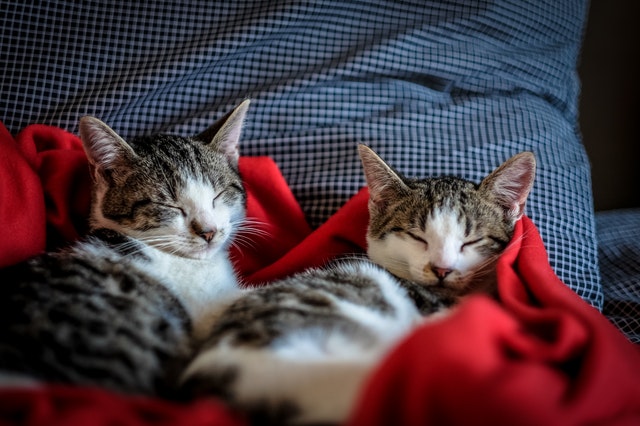 To find each cat’s happy place, keep an eye out for the places your kitties choose to go for a nap on their own. Deck out the discovered spot with their favorite blanket, bed, and toys. With all their goodies bearing their own familiar scent, your cats will rest easy in their special space.

Set Up a Litter Box for Every Cat

We know territory is a huge deal for cats. And the litter box is prime real estate as cats don’t like to share their potties. Unacceptable marking behaviors can arise if one of your cats is not pleased with litter box arrangements. And when a new cat saunters into the mix, everything about the litter pan changes in the eyes of your resident kitty.

Urine is more than an elimination product for cats. In their pee, felines tell other cats many things, like what belongs to them, when they were there, and even when they’ll return, according to the ASPCA. 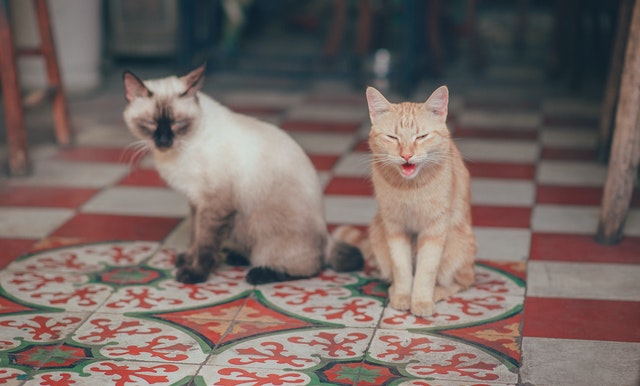 If your cat, new or existing, has started going outside the pan, the ASPCA offers some tips to help correct the issue:

Like the litter pan, cats do well when they have their own designated bowl to eat from. At least until everyone gets settled in. But, as humans usually have a bowl or plate they prefer to eat from, cats can be the same. Maybe having two separate food bowls is a good idea as cats are all about territory and mealtime. 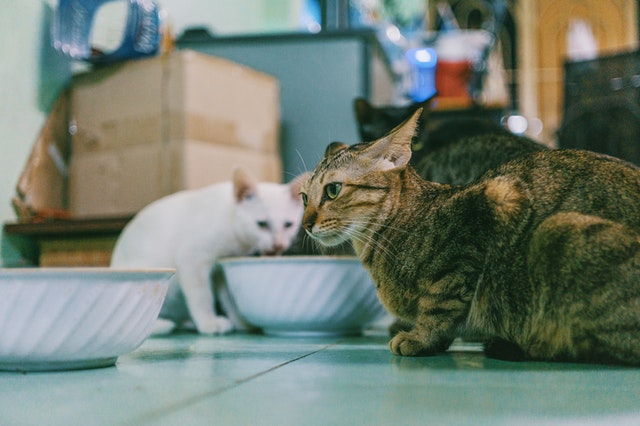 If one bowl appeals more than another to one cat, but the other cat likes the second option, leave them both. Everybody gets their own bowl. Nothing wrong with having more than one food dish if it keeps the felines happy!

Spay and Neuter Your Fur Babies to Avoid Accidental Kittens

Intact male cats are ruled by their hormones. The desire to fight for territory and mate is strong. It can be hard for toms to let their lovey side flow. Once males are fixed, they tend to be calmer and happier cats. If your cats are male and aggression seems to be an issue, have your boys neutered so they enjoy napping rather fighting with each other.

For females not spayed, they run a higher risk of ovarian, mammary, and cervical cancers. Plus, without a heat cycle, lady cats tend to be more relaxed and not inflamed by their instinctual needs.

Citing Higgins & Pineda’s 1980 conclusion regarding pet population, the University of Massachusetts Amherst Natural Science Department states, “that spaying and neutering, if anything, helps curb hyperactivity associated with a sexually mature animal, and will likely calm your pet down as it removes the primary distraction in their lives.”

Male and female cats tend to roam less when fixed, keeping them closer to home. Both sexes are also at lower risk for contracting feline leukemia and feline AIDS once they’ve been spayed or neutered. 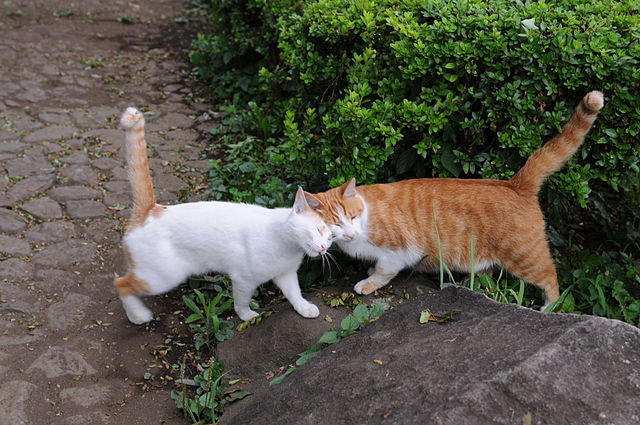 Beyond preventing unwanted litters of kittens, spaying and neutering your cats creates a more harmonious environment for everyone sharing your home.

The same tips for introducing cats to each other stand when it comes to bringing a kitten home. But kittens are fireballs of energy which can sometimes vex an adult cat who’s already grown out of their kittenhood. International Cat Care does believe introducing a kitten to an older cat can be easier than introducing to fully-grown cats though. 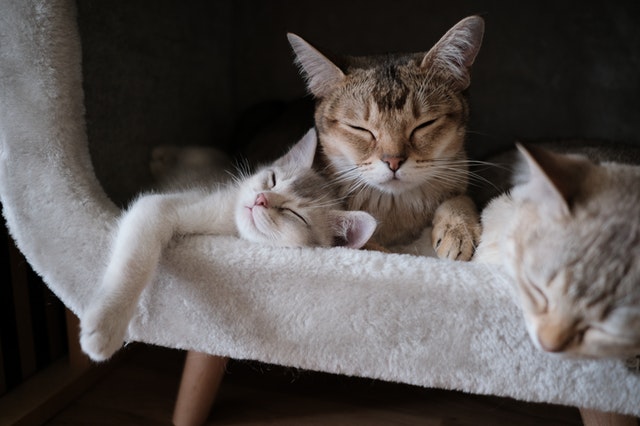 When introducing cats of any age, special attention needs to be lavished on the resident cat. This was their home first and a newcomer can turn the quiet life she knew before upside down. When kittens come to their new homes, it can be an easier adjustment for them because of their youth. Be sure to give your older cat reassurance in his dealings with a hyper kitten.

Introducing cats to each other can be stressful, for them and you. And cats will pick up on your stress vibes. Try hard to keep yourself calm, cool, and collected when it’s time for the big introduction. 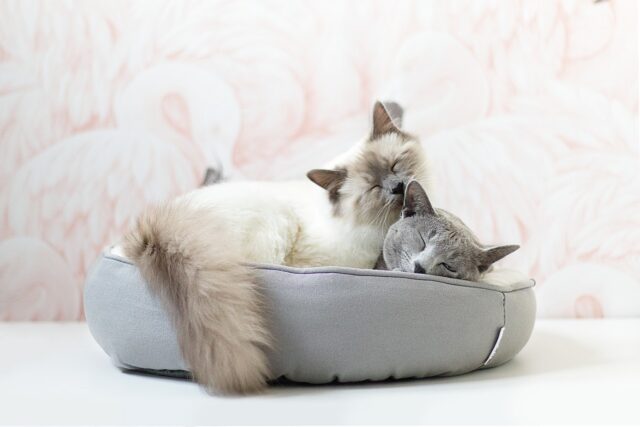 Introducing cats to each other can seem daunting. But you’ll make it through!  With research, time, and patience, your cats, both new and long-time residents, will find themselves part of a loving and happy forever home. 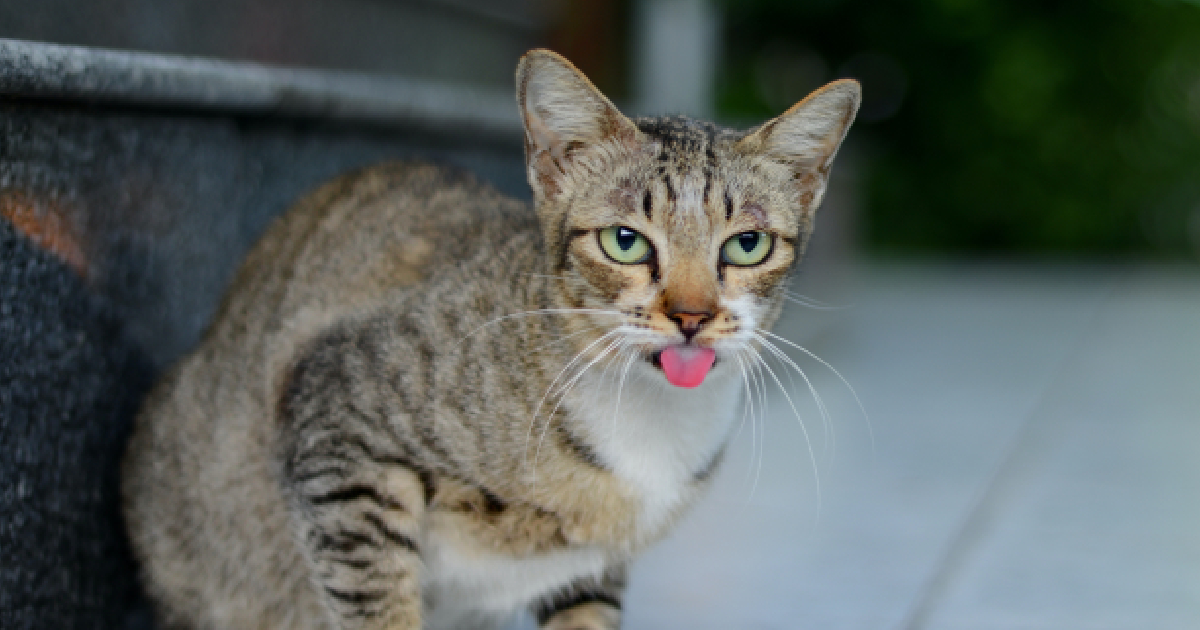