When it comes to cat litter, there are so many different types to choose from. Many litter brands are made from two specific litter types: crystal and clay. Sure, many cat parents are familiar with clay litter, but how much do you really know about the advantages and disadvantages of it? How do you know which litter is best for your cat? Luckily, iHeartCats has partnered with PrettyLitter, who has helped share some of this beneficial information with you. 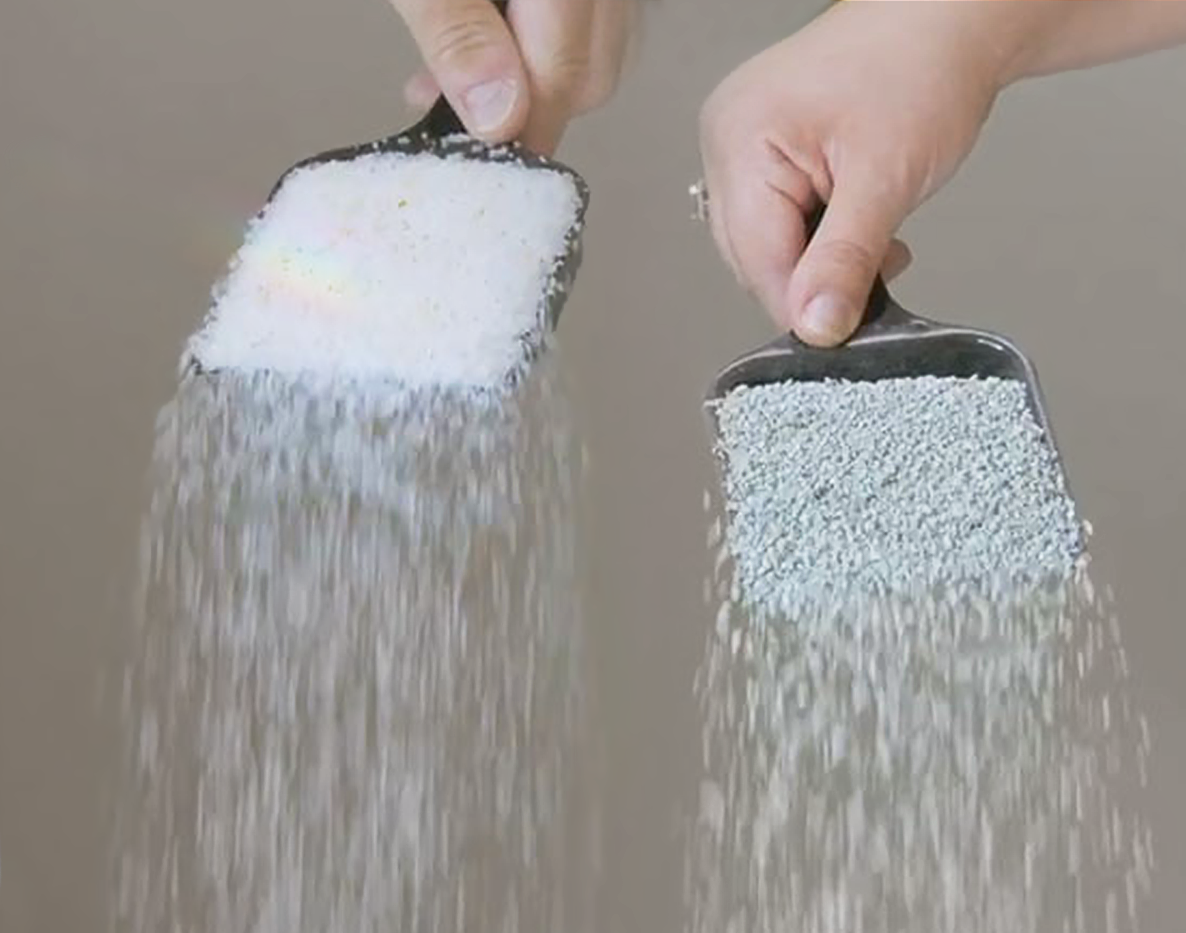 To best understand the differences between clay and crystal litter, it’s important to look at all the different aspects of it. How long it lasts and odor control are two of the most important things to look for when choosing a litter.

Clay litter is likely the most popular litter out there, but that doesn’t automatically mean it’s the best option. Many cat parents choose clumping clay litter because it’s the type of litter they know the most about and it’s the oldest type on the market. This type of litter is made with sodium bentonite, which is a natural clay that swells up when it comes into contact with moisture.

Since clay litter has been around so long, many cat parents believe it’s the most convenient choice, but it’s actually heavier and needs to be changed frequently. Also, what many cat parents don’t realize is that it could also create other problems for your cat. If your cat ingests the clumping clay litter, it could swell up inside them, causing an internal blockage. Cats step in their litter and lick their paws often, so this is a serious concern for families using clay litter.

Clay litter is usually fairly dusty as well, and it’s not as absorbent as crystal litter is. This can cause it to be messier and not last as long. So, just because you’ve used clay litter your whole life doesn’t mean you can’t make a change. 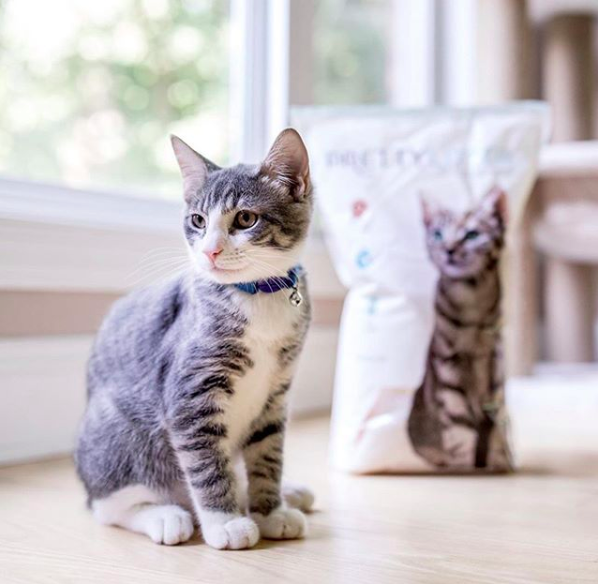 Crystal litter is made with silica gel beads, which are solid granules of sodium silicate. These particles have microscopic pores, allowing them to absorb nearly 40 times their weight in moisture. Because the beads are so porous, they soak up the liquid in the kitty litter exceptionally.

When your cat uses crystal litter, the litter absorbs all the moisture. When the urine comes into contact with the silica gel beads, their pores trap all the odor at its source and then eliminate the moisture to keep your cat’s litter long-lasting. You won’t have to worry about your guests smelling the litter box anymore with crystal litter.

Crystal litter has virtually no dust, which means that it’s kinder to people with allergies. It can also prevent cats from developing asthma, and it’s certainly easier on the lungs of cats that already have asthma. Plus, crystal litter is not classified as a carcinogen to humans or cats, and it’s non-toxic if ingested.

Since a lot of cat parents are unfamiliar with crystal litter, there are a lot of myths and misunderstandings about it. However, it’s time to put these rumors to rest.

There are some common misconceptions when it comes to crystal silica litter because the term ‘silica’ often confuses people. The silica gel in crystal litter often gets confused with crystalline silica, which has been classified as a human lung carcinogen and has hazardous health effects.

Crystal litter is NOT made with crystalline silica. It’s made with silica gel, which is an amorphous silica that’s non-toxic. There are no hazards associated with amorphous silica. In fact, it’s similar to the silica gel packets found with food, which are there to keep the products fresh and prevent them from getting soggy. The reason those packets say “do not eat” on them is not simply because they’re not food, not because they’re harmful. 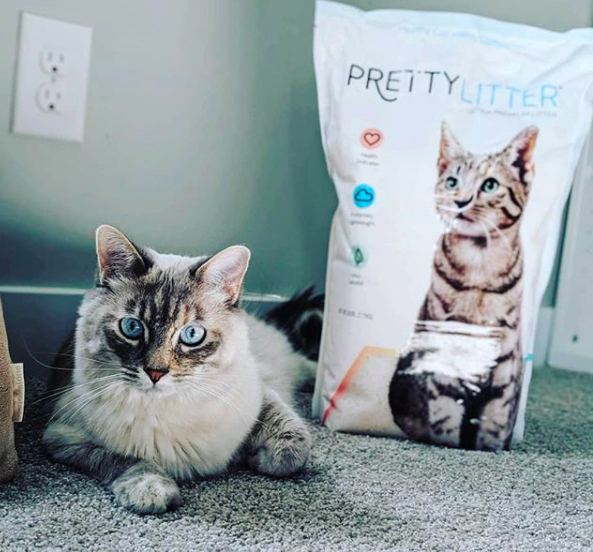 It’s Only Good for Older Cats

Some cat parents also assume that crystal litter is only ideal for cats of certain ages, specifically older cats. However, like most cat litters, crystal litter can be used for all cats. In fact, it’s easiest to start using crystal litter when your cats are young. That way, you don’t have to worry about transitioning their litter later on.

However, if you have an adult cat at home and you’re looking to switch their litter, that’s okay too! Some cats can be picky when it comes to the litter they use, so a transition will work best for most cats. Instead of switching their litter out of the blue, start by mixing the old and new litters together – about 75% new litter and 25% old litter. This can help your cat adjust, and they might not even realize there’s a difference when you finally switch to only crystal litter.

Everyone likes products that are affordable in price, so cat litter is no different. However, many cat parents assume that crystal litter is more expensive without doing the math. Of course, every brand of kitty litter is different, but overall, crystal litter is often comparable or even cheaper because it lasts much longer. One small bag of crystal litter might be the same price as a larger bag of clay litter, but you’ll still get your money’s worth with the crystal litter because of its durability.

For example, 1 bag of PrettyLitter costs $22 and provides 6 pounds of crystal litter that will normally last a one-cat household 3-4 weeks. That’s the equivalent of about 25 pounds of clay litter, which is how much is typically used in a single month.

When you try anything new with your cat, there will always be health concerns that will arise. So, here are some common questions when it comes to your cat’s litter.

How Does Crystal Litter Last So Long?

Many cat parents are baffled by the fact that crystal litter can last so long. It almost seems magical. The reason it can last a while is because of how absorbent the pieces of litter are due to the microscopic pores of silica gel. The litter absorbs the odors and eliminates the moisture, so as long as you scoop the poop, the litter can stay good for up to a month.

However, crystal litter can only last that long if it’s used properly. The best way to use it is to discard the feces daily and stir, moving the litter from bottom-to-top and side-to-side. This can help the litter last the longest because it helps all the crystals best eliminate moisture and trap the odor. For non-clumping crystal litter, it’s important not to remove any litter to help properly maintain the depth. Otherwise, urine pools at the bottom of the litter box could shorter the litter’s usage life. 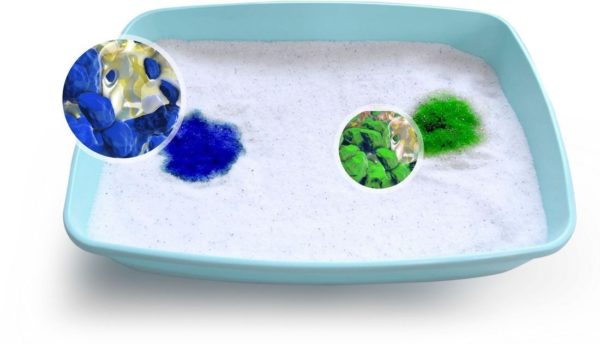 What are Common Health Issues Related to the Litter Box?

As mentioned earlier, one of the biggest health issues related to the litter box is the sodium bentonite that’s found in clumping clay litters. Consuming clumping litter can cause the litter to clump inside your cat, which is a scary thing to think about!

Also, dust is another common health problem when it comes to the litter box. Litters that are very dusty can cause respiratory issues for both cats and humans. Litters with lots of dust can be the cause of feline asthma. Luckily, crystal litters like PrettyLitter can be safer for your furry friend!

When it comes to choosing cat litter, it’s important to make sure it checks all the boxes for your cat. With PrettyLitter, a popular crystal litter brand, it’s not only the best in odor control, convenience, and durability, but it can also monitor your cat’s health!

This revolutionary cat litter can indicate some common cat health problems like UTIs and bladder stones before it’s too late. If something’s wrong with your cat, the litter will change colors to alert you. Cats can be great at hiding their health problems, so it’s important to be alerted about any concerns before they worsen.

Are you ready to switch to a litter that’s safe and convenient while keeping tabs on your cat’s health? Then, switch to crystal litter by choosing PrettyLitter! We’re proud to have PrettyLitter as our sponsor, so you can now get 20% off your first month with the code BESTPET20! 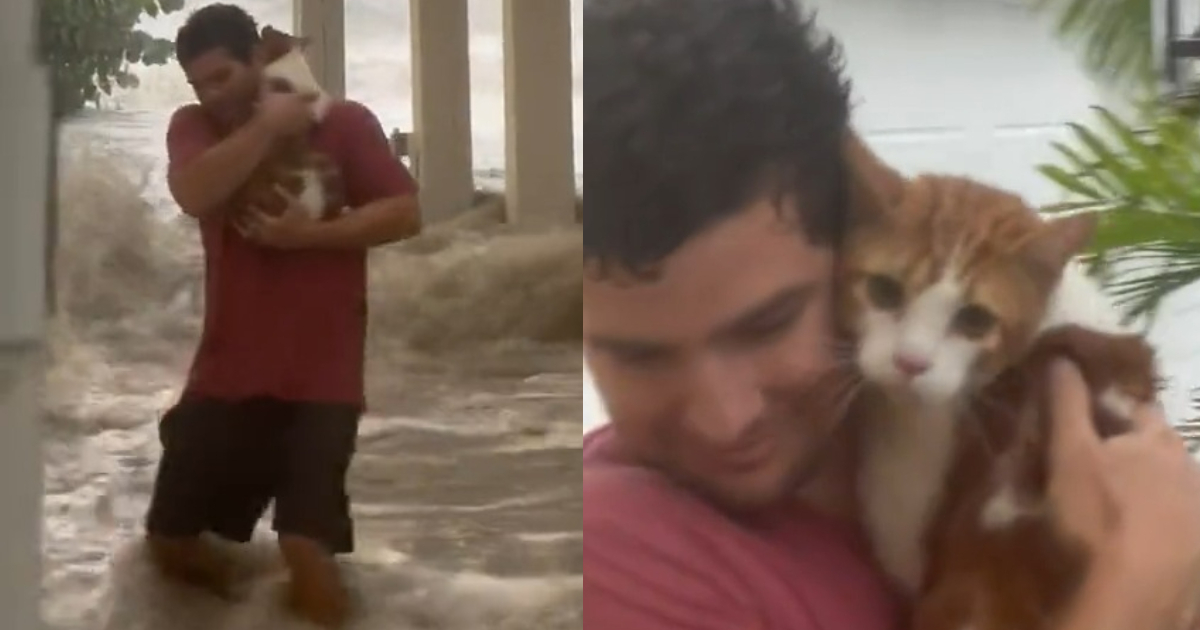