Animal rescue experts typically classify stray cats into three categories: socialized, semi-feral, and feral. Socialized cats are fully domesticated and comfortable around humans, while feral cats have had little to no human contact and are basically wild animals.

Semi-feral cats fall somewhere in between. They tend to avoid being touched, but may vocalize when around humans or even make eye contact. Although it is a slow, difficult process, taming a semi-feral cat is possible. These 6 steps will help you turn that frightened neighborhood kitty into a new furry friend!

Ignoring an animal that you are trying to socialize may seem like silly advice, but according to Becky Robinson, president and founder of Alley Cat Allies, snubbing a semi-feral kitty will pique its curiosity and force it to make the first move.

“Cats are animals that seek pleasure and attention,” she says. “If they are used to people, then they want that attention.”

Waiting for the cat to reach out to you, then providing a positive interaction, will show it you can be trusted. 2. Keep her coming back for more.

The next step is to provide relaxed, non-threatening enrichment to ensure that the cat enjoys spending time with you and keeps coming back. Feline rescuers say the best time to initiate an interaction is during meal times. They also recommend providing treats and toys to encourage the cat to connect with you one-on-one. 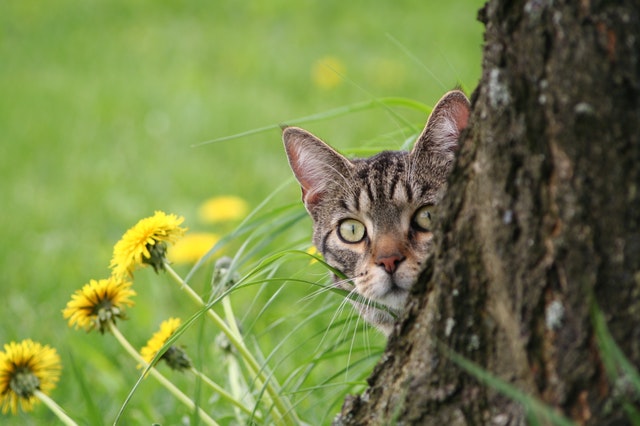 Remember that many of the things we take for granted as typical aspects of life may be quite frightening to a semi-feral cat. Sounds like human voices, music, and opening and closing doors may send a nervous kitty running for the hills. Use feeding times as an opportunity to speak softly and perform slow, deliberate tasks in order to desensitize the cat and show it you are not a threat. Once you have welcomed your new semi-feral kitty into your home, there is still work to be done. The cat will be understandably nervous and require a place to hide when overwhelmed. This will help prevent her from feeling cornered.

“What kicks in is the natural fight or flight response,” Robinson says. “If they are not given an option to flee, then they have to fight. They are very scared and they have to defend themselves.”

At the same time, providing too much space can also be overwhelming and lead to trouble – especially with curious kittens. Robinson advises confining the animal to a small room with food, water and a litterbox. Be sure to kitty-proof the room first by removing anything fragile or potentially harmful – like wires that could be chewed. 5. Consider a calming remedy to help her with the transition.

Just as a hot bath and a cup of herbal tea can take the edge off a stressful day, providing a soothing remedy like catnip, pheromone sprays, or calming supplements may do the same for your new cat. While some semi-feral cats can be tamed in a matter of weeks, it usually takes several months or even an entire year before they completely come around. According to Robinson, almost all cats can be tamed, just remember to be patient, stick to a schedule, respect her natural needs, interact with her every day, and provide lots of treats!

H/T to The Catnip Times