Over forty-two million American households know the joy of living with a cat, according to Best Friends Animal Society. And within those feline domiciles live more than 76 million cats, which means many homes include more than one cat in their family roll call. When cat pawrents were asked how their kitty loves came to live with them, the majority of cats found their forever homes thanks to adoption from rescues and shelters. Lots of felines also find homes right off the streets, being saved from the stray life by their new family. Other cats come to homes from family and friends. And the majority of the cats that find homes in this manner are mixed breeds.

But fifteen percent of cats are purchased from breeders, meaning these felines are purebreds. And while many of us have mixed breeds, we can see their breed makeups played out in their appearances and their personalities. So, whether you love a purebred or a mixed breed, you should know these 31 popular cat breeds. You might be surprised what breeds you puzzle out in your rescue cat!

31 of the Most Popular Cat Breeds

These cats are as pretty as they are silly, earning the ticked-marked Abyssinian its nickname, the “Clown of the Cat World.”

Originally named the Domestic Shorthair, the Cat Fanciers’ Association explains the breed name was changed to American Shorthair in 1966 to capture this kitty’s All-American spirit.

The Balinese is essentially a long-haired Siamese that came about thanks to a mutation quirk in a Siamese litter born in 1940.

A little leopard lookalike, the Bengal wears beautiful rosettes and often sparkles as though dusted with glitter thanks to an iridescent sheen in their fur.

Legend tell this Sacred Cat of Burma earned its title after goddess Tsun-Kyan-Kse gave favor to a monk’s cat, creating the breed during a divine encounter that saw the first Birman assisting in the transmigration of her beloved monk’s soul.

Sleek shadows, the Bombay is nicknamed the “Parlor Panther.” One look at these shiny black cats and their yellow eyes, and you’ll understand why.

A calm cat, these plush-furred cuties will love a snuggle on the couch. Daily Paws likens them to teddy bears and, with a smile as a sweet as the British Longhair, the comparison makes sense.

These fine felines boast one of the longest lineages, tracing their furry roots all the way back to Ancient Rome. You can see the history in those big eyes!

Cats and curiosity are synonymous, and perhaps it was a Burmese cat that first made people take notice of feline meddling as the breed is known for its nosiness. Don’t try to keep a secret from a Burmese, they’ll snoop out any mystery in no time.

First noticed in medieval art, the Chartreux breed’s beginnings remain a mystery and, according to the Cat Fanciers’ Association, legend says the breed is a quiet one thanks to a vow of silence taken during their time among France’s Carthusian monks.

If a cat could be a pixie, then the Devon Rex might as well as have a flower petal cap and shimmering wings. These adorable cats love to scamper and delight in mischief, lending them an even more of a sprightly vibe.

Originating in Egypt and titled with a name that means “cat” in Egyptian, the Mau is an athletic and intelligent cat. Though not marked like traditional tabbies, the Mau does wear the “M” on their forehead. While all manners of legends surround the marking, when it comes to the Mau, Egyptian legend calls it “the mark of the sacred scarab.”

The good, old-fashioned housecat of European homes for centuries now, the European Shorthair proves time and again to be one of the most popular cat breeds on the continent.

Known as the Kashmir in some international cat registries, this cross between the Persian and the Siamese creates a sweet cat who knows how to charm a camera lens as well as their pawrents.

Want tips on how to capture the best pics of your cat? Here are 7 Tips For Taking Better Pictures Of Your Cat.

Big, beautiful, and fluffy, the Maine Coon is called the “Gentle Giant of the Cat World.” And, anyone looking for a cat with a doglike personality would be thrilled to add these intelligent cats to their family.

The Nebelung is a German cat breed whose name means “creature of the mist.” These fae cats of silver fur have an enchanting and ethereal air about them that makes cat lovers fall under their spell.

Called the Skogcatt in its native Norway, ancient myths surround this wild-looking fluff and, whether or not it was the breed prowling Viking shores thousands of years ago, it’s certain truth that Wedgies are affectionate cats that love their families.

Spotted, sporty, and sleek, the Ocicat is another domestic cat with the look of the wild. Unlike big cats, this sweetheart loves to cuddle and wants to talk to you about your day!

Lovely and lazy, Persians make the best nap buddies. After a snooze, spend time combing out the floof while lavishing her with love.

Who are the loafiest of the loafs? Check out the 10 Laziest Cat Breeds.

Much like their Ragdoll cousins, the RagaMuffin loves hugs and laps. So sweet and so furry, this cat will be your BFF and your favorite blanket.

These cute cats are aptly named as a Ragdoll cat will go limp in your arms! A cat breed for families, you can haul your Ragdoll around like a baby, but be sure you’re arms are in shape because these big babies can weigh up to 20 lbs.

A short-haired cousin to the long-haired Nebelung, Russian Blue cats are as charming as they appear and carry the lofty alternate name of “Archangel Cat” or “Archangel Blue.”

Recognized for its distinct folded ears and hailing from Scotland, this family-friendly cat breed can trace its roots back to a barn cat names Susie. The breed does evoke some controversy however.

A classic feline for the ages, the Siamese evokes feelings of mystery and wonder with their striking colors and piecing blue eyes. While their origins aren’t completely known, we know the breed was in existence by the 14th century thanks to its mention in the Tamra Maew, a book of cats poems created in Thailand when it was still known as Siam.

This fluffy beauty is an adventure cat that’s been prowling the cold Russian forests for at least a thousand years, making it an ideal character for the fairytales and folktales of old.

Teeny, tiny and purrfectly cute, the Singapura hold the distinction as the world’s smallest cat breed. Learn more about the Singapura and check out more Cute Compact Cats AKA Itty-Bitty Kitties.

Born all white, Snowshoe cats gain their full coloring after a few years, but they always keep those cute white paws that earned the breed its name!

Nicknamed the “fox cat” due to their vixen eyes, pointy ears, and bushy tail, the Somali is a lovely long-haired sibling to the Abyssinian.

The Toyger looks just like the name sounds, a toy version of a tiger captured in a domesticated cat! Intelligent and social, this wild looking cat will make friends wherever he roams.

The Toyger isn’t the only little big cat. Meet 7 Cat Breeds That Look Like Wild Animals.

One of the most ancient cat breeds, the Turkish Angora is an elegant example of feline finery. Plus, their manners are as flawless as their silky white appearance.

Called the “swimming cat” for its love of water, the Turkish Van is an white semi-longhaired white cat with markings on their head and tail only. When a Van appears looking like fresh snowfall in pure white though, they’re called Turkish Vankedisi.

So we’ve met the most popular cat breeds, which also encompasses the world of the most common cat breeds, but what about those rarely seen? Let’s meet 5 of the more unusual cat breeds.

First springing into the world due to a natural quirk of genetics, the Wirehair sports a crimped, wiry fur. Though their fur isn’t the softest, their hearts are and they love their families, children included.

Known as a minority breed, having a Korat select you as their own makes you luckier than a lottery winner. Called the Si-Sawat cat in its native Thailand, this “cat with five hearts” is ancient and thought to be a symbol of good fortune.

These curly-coated cuties are nicknamed “Alpaca Cats” because of their lush, thick curls. Though they look like they spend hours styling themselves, these kitties are low maintenance cats who’d rather explore and give you kisses rather than worry if their curls are just right.

Can you say adorable? The Minskin is a mix between the Munchkin and Burmese with some Sphynx thrown in. This precious baby is hairless, long-bodied, and set on short legs. Could they be the Dachshunds of the cat world?

Exotic and handsome, the Peterbald is loyal and loving with many likening this affectionate cat to a canine. This unusual cat will play fetch and enjoy some cuddling. 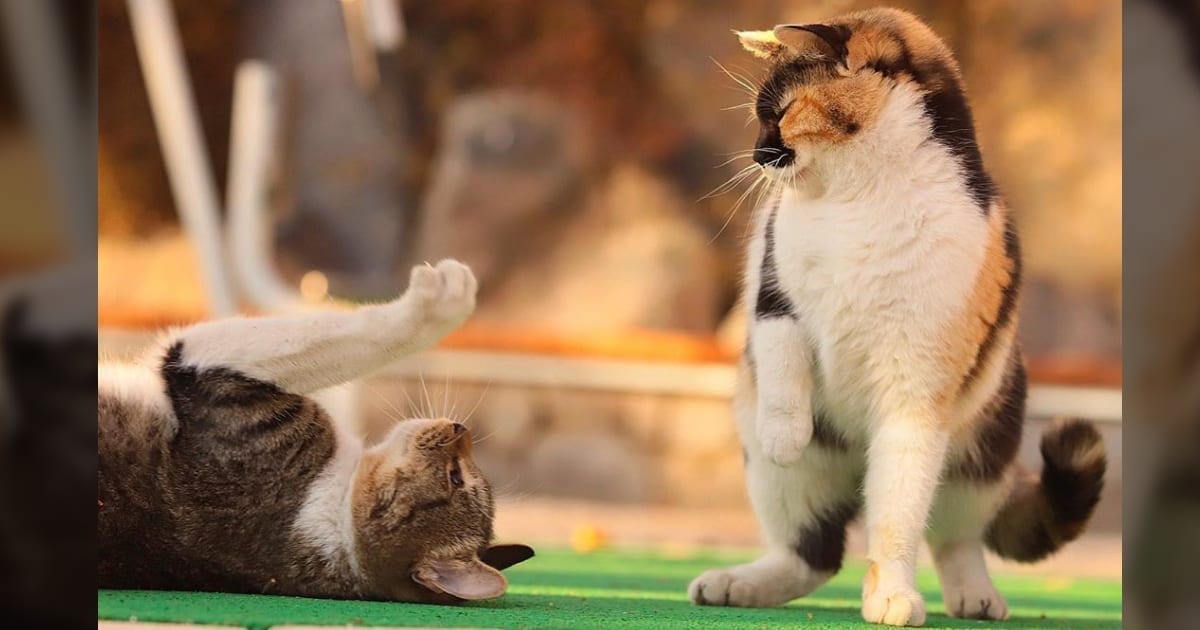 Play Fight Or Real Cat Fight: How To Spot The Difference