Warning: Some of the images below may be disturbing for some readers.

From his frostbitten face to the exposed bone in his tail, Spero was looking every inch like the ghost that he would soon become.

The cat was likely left behind when his family moved. But he still haunted his old neighborhood in Cantley, Quebec, thinking maybe a door might finally open for him…

And a door did open, just in time, and in an unexpected place.

Sandi Lawson, founder of Adopt Me Cat Rescue, saw a picture of the cat someone had posted on Facebook. The town was about 15 miles from her home in Ottawa, Ontario.

“When I saw the condition of the cat, I thought, ‘I need this cat.’ Bring him to Ottawa,” Lawson tells iHeartCats.

“This cat arrived extremely emaciated. I don’t think he would have lived much longer.”

But it was obvious Spero was a cat who had once known a family. He trustingly, even affectionately, let medical staff get to work in pulling him back from the brink.

“His coat was so matted and tight to his body it had almost turned into felt,” Lawson says. “It was unbelievable.”

One by one his various hurts and conditions eased. However, Spero will always live with feline immunodeficiency virus (FIV), a disease that leaves his immune system vulnerable.

But Spero’s scars are only on the outside. Despite the ordeal, his mammoth heart is fully intact.

“He’s a very, very affectionate cat,” Lawson says. “A very, very chatty cat. And he’s very appreciative. This cat knows he was saved. He appreciates everything.”

“He eats each meal like it’s his last,” Lawson says. “He attacks it like he’s not going to get another meal. That’s going to take him a long time to deal with that.”

But for the first time in a very long time, time is on Spero’s time. In Lawson’s patient hands, he can follow the road to recovery at his own sweet pace.

And at the end of that road?

“His transformation, I think, will be amazing,” Lawson says. “He’ll be a beautiful cat when done.”

At least, on the outside. Spero, whose name is Latin word for ‘hope,’ was always beautiful on the inside.

You can follow Spero’s journey to a new life here.

We’re so glad that this sweetheart is finally getting the love and care that he deserves. We wish him the best of luck as he continues his journey! 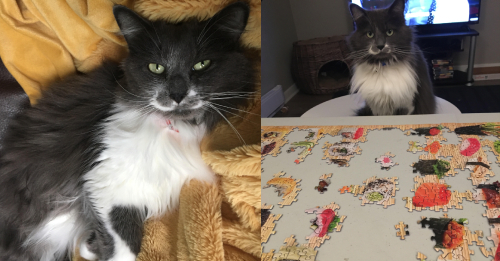