“Many people get involved in animal rescue because of the pictures of animals scheduled to die in open access shelters. They don’t realize that those animals are only a small portion of the calls they will get. Often the ones that get to the animal control shelters are the ones saved. Our rescue has a large network of foster homes and adopters. Each adopter and foster spreads the word about our dedication and love for the furbabies, and the steps we take to help them. We get pleas for medical assistance, help rehoming their furry family members, and the calls asking for assistance with the strays showing up in their yards.

“One such call came into one of our fosters in central Illinois. The foster’s aunt had a cat show up at the house, and thanks to a broken window, the cat was sleeping on their enclosed porch. The town has a large population of stray cats, and the local animal control will not pick up cats, even if they are injured. 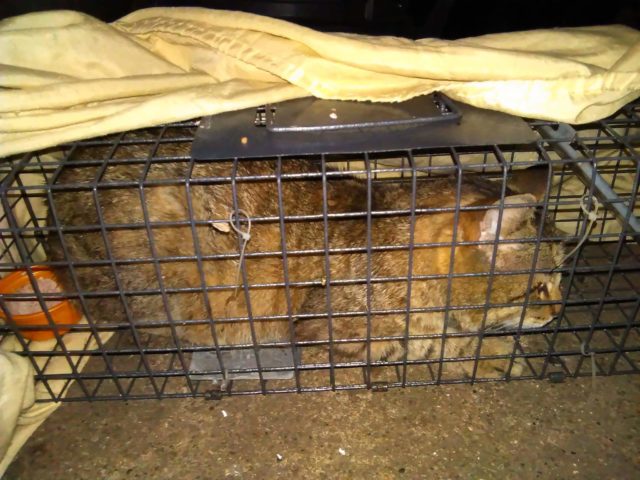 “The family couldn’t get near the cat, so they thought it was feral. We wanted to wait for a space to open up before trapping, but life had other plans.

“A week after this cat showed up, the family found a kitten under their bushes. They managed to capture him and named him Walker. Now, we all know when there is one kitten, there are usually 2-3 close by, and time is not a kitten’s friend. Our foster couldn’t put off the trapping any longer. She grabbed her kitten traps and rushed to her aunt’s house.

“To make things worse, we discovered that a man living a couple of houses away started shooting cats with his BB gun whenever he saw them. He thought it was fun. The stray porch cat was one of his usual targets.

“At 2 am, the porch cat still hadn’t shown up. We began fearing the worst since the family said he usually showed up around 10 pm. We freshened up the bait in the traps and went back to waiting. “Finally, at 3:30 am, one of the kitten traps had something in it. And just FYI a kitten trap is 6×6, big enough just for a kitten. Imagine our surprise to see a full grown adult male cat in a kitten trap! How he managed to squeeze in will remain a mystery, but hunger is a huge force.

“Once the cat was transferred into a carrier and given food, we discovered that instead of hiding at the back, he sat right up front and immediately began to eat. This is not the normal feral behavior. In the next few days we discovered that this boy, soon named Sheb, was a friendly, skinny, unneutered male, with BB shots buried under his skin.

“No more kittens were found at that location, even though the traps were left out for 24 hours.

“Sheb successfully recovered and gained back the weight. Pretty normal for his size or even a little more. Thank you Rescue Bank for making his recovery possible! 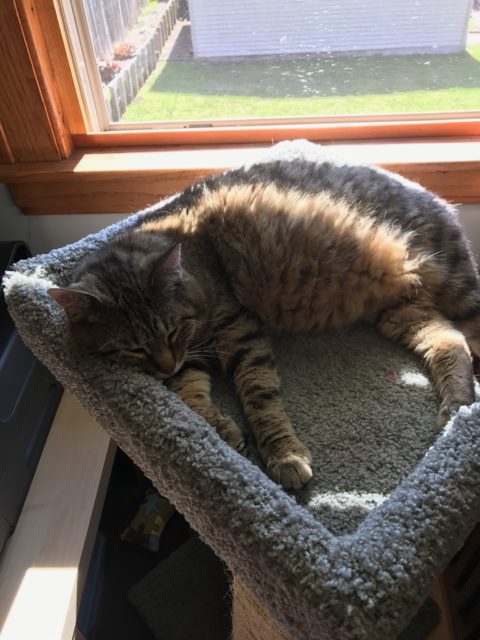 “After some wait, we were able to transfer Sheb to a Petco adoption event. Of course, this lover boy caught the hearts of our volunteers, and they were pitching him to each adopter that showed up. Finally, a previous adoptive home came looking for a kitten and went back home with SHEB!

“We could not be happier for our boy! Rescue Bank is our angel! We could not have helped as many cats without their help with food, litter, and vaccines. To put a number on it, 75% of our intake is made possible by Rescue Bank donations.”

You helped change Sheb’s life! When you shop from the iHeartCats store, you’re supporting Rescue Bank. Rescue Bank provides shelters with high-quality food, so their funds can be used for other things, like supplies and medical care. Your Purchases Filled a Starving Cat’s Belly with Nutritious Meals You Helped This Lost Cat Find Her Way Home!