Looking at this stunning flame-point Persian, you would never believe that she was born inside a puppy mill in North Carolina. She was found when the Humane Society of the United States (HSUS) did a bust on the home.

“This was a repeat offender that had been arrested and convicted of animal cruelty 10 years prior,” explains Kim Alboum of the HSUS. But North Carolina has no regulations in regards to puppy mills, so there was nothing stopping this person from doing it again (and again). And there was Athena, in the middle of a fifthly, puppy mill, clearly not being taken care of either. As a result of the terrible conditions she was born into, Athena has chronic upper respiratory infections and takes many vitamins and supplements to try and boost her immunity.

Luckily for Athena, the HSUS stepped in and she was adopted by amazing woman who is using Athena’s “sass” to spread the word about puppy and kitten mills and the importance of adoption.

The following video tells the rest of her transformation, as part of the HSUS’s Forever Home series. The series was created to show the amazing transformations that animals have gone through since being rescued by the HSUS’ Animal Rescue Team.

“The videos are also a way to raise awareness about animal cruelty and neglect, while encouraging people to adopt from their local shelter or rescue group,” explains Lindsey Peters, of the HSUS.

“Residents who’d like to help can contact their state representatives and ask them to pass animal protection legislation,” says Peters. “A great way to help is to go to humanesociety.org and sign up – we’ll let you know how you can take action at the local and national levels.

As for Athena, she is going to continue being a Hero Cat every day. She is a “spokescat” for Brother Wolf, one of the HSUS’ emergency placement partners and animal shelter in Asheville, North Carolina.

In addition, she goes to school with her owner, Dani Ellis. Ellis is a preschool teacher and the children just love Athena.

“One of the students has autism and having Athena there really helps him,” says Peters. 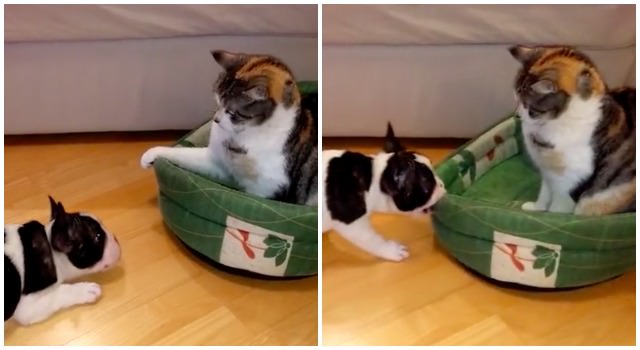