On February 13, Thuy Duong Panda‘s cat went into labor in Hanoi, Thailand. She ended up giving birth to 4 healthy kittens, but what sets this story apart from most is the fact that the father insisted on being by his “wife’s” side through it all!

Not only did he stand guard and comfort her throughout the process, he spent several days after snuggling and caring for his new babies!

Several photos of this “Cat Father of the Year” were shared to Imgur, prompting users to declare the orange tabby is “a better father than most humans.” User Pretzelwagon proclaimed the photo-series is “a better love story than Twilight!”

Based on the internet translation of a story posted by Thai media site Tiin.un, it would seem that Thuy Duong adopted the orange tabby male and patterned calico female about a year ago.

The pair are extremely close and bonded, leading the owner to describe them as “husband and wife.”

When the mama cat went into labor they tried to separate daddy from her and the first 2 kittens, fearing that he might be too rough or even aggressive.

He cried and carried on so much that they soon allowed him back into the room, where he proved that their fears were unnecessary.

Once all 4 beautiful kitties were delivered and tended to, mom and dad fell asleep in each others’ arms (or paws), with the entire litter snuggled up between them.

Even though the role of a cat dad is usually over after conception, this modern-day “Mr. Mom” refused to leave his family’s side longer than to use the litter box or get a drink of water for days after the birth.

Once the kittens are weaned and old enough to be adopted, Thuy Duong plans to give them away in pairs so that they are less likely to be lonely for their family.

Mama and babies are doing great! 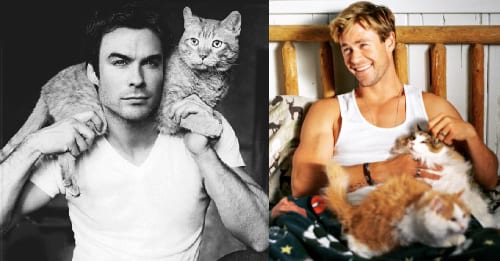